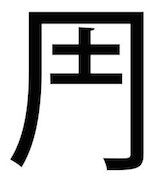 Today’s post is about a recent change I’ve made to my Japanese model deck to make my daily reviews a lot faster and more enjoyable. I’m quizzing myself on a new concept, which I’m calling “Kanji Signatures.” I made a video to talk about all of this, so if you prefer video, just jump to that and all will be clear. If you prefer reading things, then you’ll find a discussion afterwards. And, at the bottom of the page, you’ll find a link to the new model deck.

The Video (this explains the whole idea):

The idea is this: some kanji characters are fairly easy to remember. They’re composed of just 2 radicals, and if you’ve connected those radicals to images, it’s pretty easy to create a story out of two images. If 見る is “see”, and the Kanji character is composed of 目 (eyeball) and 儿 (legs), then it’s not hard to jump straight to an eyeball with legs, wandering around looking at things. (Note that the images in parentheses are my own associations, discussed over here.)

The problem is when Kanji becomes much more complex.

The Kanji for “week” is 週, and it’s composed of FOUR radicals: 冂 (mustache) 土(grave) 口(mouth) ⻌(winged boots). It becomes harder to create a story with that many pieces, and much harder to remember it. It’s doable – once a week, I bury my mustachioed friend alive in a grave, but he eats his way out, and I run away with my winged boots – but it’s painful, having to remember every detail. And trying to remember such complex stories many times every day was wearing down on me when I had to do my flashcard reviews for Japanese.

The solution I’ve found is to introduce complex (3+ radical) Kanji characters in stages.

First, I’ll associate the Kanji with a 2-radical chunk. For “week”, that’s going to be 冂 (mustache) and 土(grave), since those are the first two radicals in 週. And so I’ll make a quick story with those two images. For instance, I’ll see a gravestone with a mustache carved into it. That’s my Kanji Signature for 週. I now have a flashcard quizzing me on whether I can remember that image.

(And in this case, it’s important I can remember that image quickly.)

Next, I’ll quiz myself on the entire mnemonic story for my Kanji character. For 週, I’ll need to remember the story that links together all four radicals, 冂 (mustache) 土(grave) 口(mouth) and ⻌(winged boots). But since I’ve already taught myself the signature – I remember mustache and grave in an instant – it becomes a lot easier to remember the rest of the details of the story.

Finally, I’ll quiz myself on the stroke order, basically forcing me to remember the signature, use it to recreate the story, and then using that story to remember the entire character.

The final result is that my reviews go faster, they’re more enjoyable, and I have an easier time sticking with my daily review habit. Nice!

Why does this work?

As far as I can tell, there are a couple of things going on here.

For one, the Kanji Signatures are giving me a very clear start point from which I can build out a complex mnemonic story. Before, whenever I reviewed, I’d remember a radical at random. For 週, I might remember the winged boots, or the grave, or the mouth first, and I wouldn’t necessarily remember where to go from there. Now, with these Signatures, I’m forcing myself to create a strong association between the word and the FIRST two radicals. This helps me become a bit more methodical about creating, storing and retrieving complex mnemonic stories. I’m no longer unsure about where I am in each story. I’m right at the beginning, and all I need to remember is the end.

Second – and I think this is most important – I’m practicing chunking. Very rapidly, I’m no longer thinking of TWO radicals – Mustache…Grave – when I see this combination:

Instead, I’m thinking Mustache-Grave, or even better, Tombstone-with-mustache-engraving. I’m effectively turning two bits of information into one single image. This is going to help me recall that chunk of information faster, which is great for remembering 週, but even better, it’s going to help me remember any future Kanji that has that combination. I’m basically creating an entirely new radical – the combination of mustache and grave. And since I’m practicing chunking with every single 3+ radical character, I’m getting into a habit of chunking all the time. That’s giving more an ever widening library of radicals to use when I’m analyzing new kanji characters, which will continue to make all future kanji easier to learn.

These cards can be used for simple words you’re learning straight from pictures (dog, cat) or abstract words that fit into example sentences (The cat is in the box). Click the picture to enlarge.

Word Form Cards (“I’d like to teach myself ‘でした’, the past tense of a word I already know, ‘です’ )

Use these cards to teach yourself verb conjugations, noun declensions, etc. Basically, if you see something in a sentence that’s a new form of a word you already know, use these cards. Click the picture to enlarge. 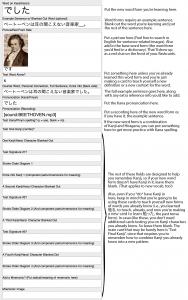 Word Order Cards (“I want to help myself remember that でした goes at the end of a sentence.”)

Any time you encounter a sentence with surprising word order, use these cards to help yourself remember which word goes where. Click the picture to enlarge. 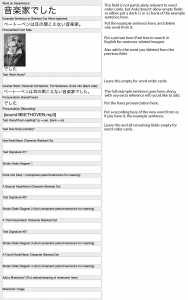 Download the new model deck here: Japanese Model Deck 10.7.15. Unzip it and doubleclick it and you’ll have the new model installed. If you need to migrate some of your old cards (using the 9.15.15 model) to the new model, check out the end of the video at the top of the post.

(And for those of you studying one of the Chinese dialects, here’s the same deck with a few “Kanji”/”Kana” swapped out for “Hanzi”/”Pinyin”: Chinese Model Deck 12.12.15 )

Also, check this out.

That’s it! Enjoy and feel free to post comments, suggestions and questions in the comments.