Pictures of Pronouns and How To Learn Them

Update 10/18/2022: This is an older post written before the release of the Fluent Forever app. A lot has changed since!

Visit our products page to download the latest app version and start learning one of 13 languages, or to sign up for our Coaching program and reach fluency with a personal tutor. But this may seem like a trivial point. After all, it’s only a small handful of words, and what’s the harm in memorizing just a few translations?

The complex world of pronouns

Pronouns can be tricky to learn because every language has slightly different ways of grouping people. For instance, most European languages have separate words for Singular-You (you) and Plural-You (y’all).

In Tagalog and Cherokee, the English ‘we’ is broken into four handy pronouns: ‘you and me,’ ‘someone else and me,’ ‘several other people and me,’ and ’you, me, and one or more other people.’ In these languages, “We should get dinner” is much less vague in all sorts of contexts.

In Navajo, you’ll even find a fourth person: I (first person) could be talking to you (second person) about our friend Joe (third person), who recently got into a car accident with some guy on a motorcycle.

Now, if we were speaking in English and I said “he got injured,” you might not be sure whether I was speaking about Joe or the motorcyclist. But in Navajo, you wouldn’t run into this problem.

Navajo splits Joe (a character that we’re in the process of discussing – third person) and the motorcyclist (a new character who wasn’t really a central part of our discussion – fourth person) apart. This lets you say “Joe got into an accident with a motorcyclist and he (the motorcyclist) got injured.” Neat.

Many other languages can also use pronouns to indicate levels of formality – a trait that English lost back in the 17th century. Back then, you would use thou when talking to family members or friends, and ye to speak with strangers or bosses.

Now that we’ve lost this, we can’t be quite as passive-aggressive and insulting as we once could.

In German, you can say something to a colleague like, “Well, naturally ye mayeth take my sandwich from the work fridge. Why wouldn’t that be alright with me?” And if you smirk in just the right way, your colleague will get intensely offended but won’t be able to say anything, since you treated him with the utmost respect.

In modern English, all we have is “Why did you take my sandwich, you dick?”, which is a little less nuanced.

Side note #1: What about thee and you? Those were thou and yein a different case, just like her and him are she and he in a different case. So thou might give him some money, and in exchange, he will give thee a loaf of bread. We’ll deal with cases in depth in an upcoming article (I’m allllmost done with it).

Our old thou and ye did double duty as informal/formal AND singular/plural. This is a common occurrence in a lot of languages, particularly those in Europe.

The history of this is kind of neat. Basically, languages seem to have a tendency to start with two kinds of second person pronouns – singular (you) and plural (y’all) – probably because this is pretty damn handy in social situations. It doesn’t get much clearer than “Hey, I have to talk to y’all!”

But then, at least in 4th century Latin, Roman emperors appeared, and people needed to figure out how to distinguish between regular Joes and big mighty Ceasar. So they began to refer to emperors in the plural (and those emperors referred to themselves in the plural too, using the royal “we” instead of “I”).

In time, people started using the plural form to refer to all sorts of people in powerful positions. That, in turn, resulted in the plural form being used as a mark of respect for anyone who wasn’t a close friend or a family member.

Korean, Japanese, and the Chinese group of languages have all sorts of formality levels, depending on your social rank, the rank and age of the person you’re talking to, and your relationship with them. Because of all of this complexity, translations can kind of fall flat.

Since there don’t seem to be many pictures of people pointing at other people, I had a bunch commissioned by an awesome artist on Fiverr. Here they are, for your viewing pleasure.

Add words as needed to help you nail down any particularly tricky pronouns. If your language makes a distinction between “You” for friends and “You” for strangers, then grab one of my pictures of “You” below, and add the word “Friend” or “Stranger” in your target language.

What about all the other, non-subject pronouns, like my, mine, his, her, our, them, etc.?

These aren’t yet comprehensive, but you should be able to cover most of your bases by adding a few clarifying words, as described above.

If you could really use a particular picture that isn’t here, let me know what it is in the comments. I’ve tried to make sure that all the figures are as different as possible, so that they aren’t easily confused.

Ideally, in the future, I’ll have these inked in and colored differently, so that they’re as distinct as possible. 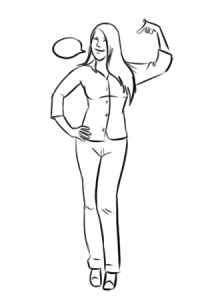 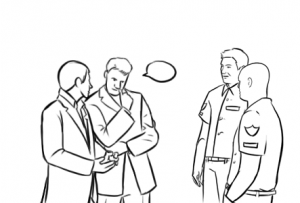 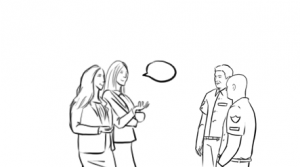 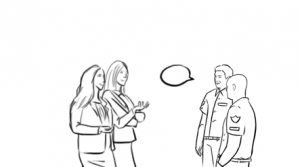 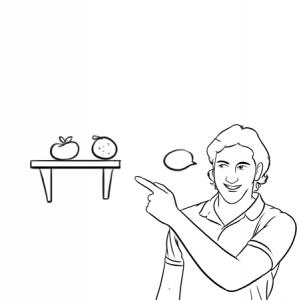 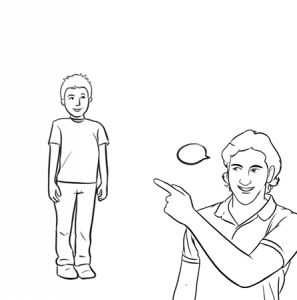 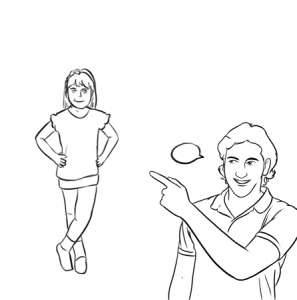 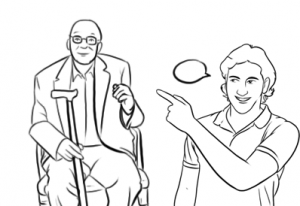 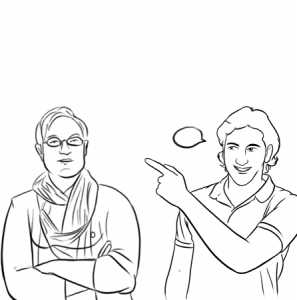 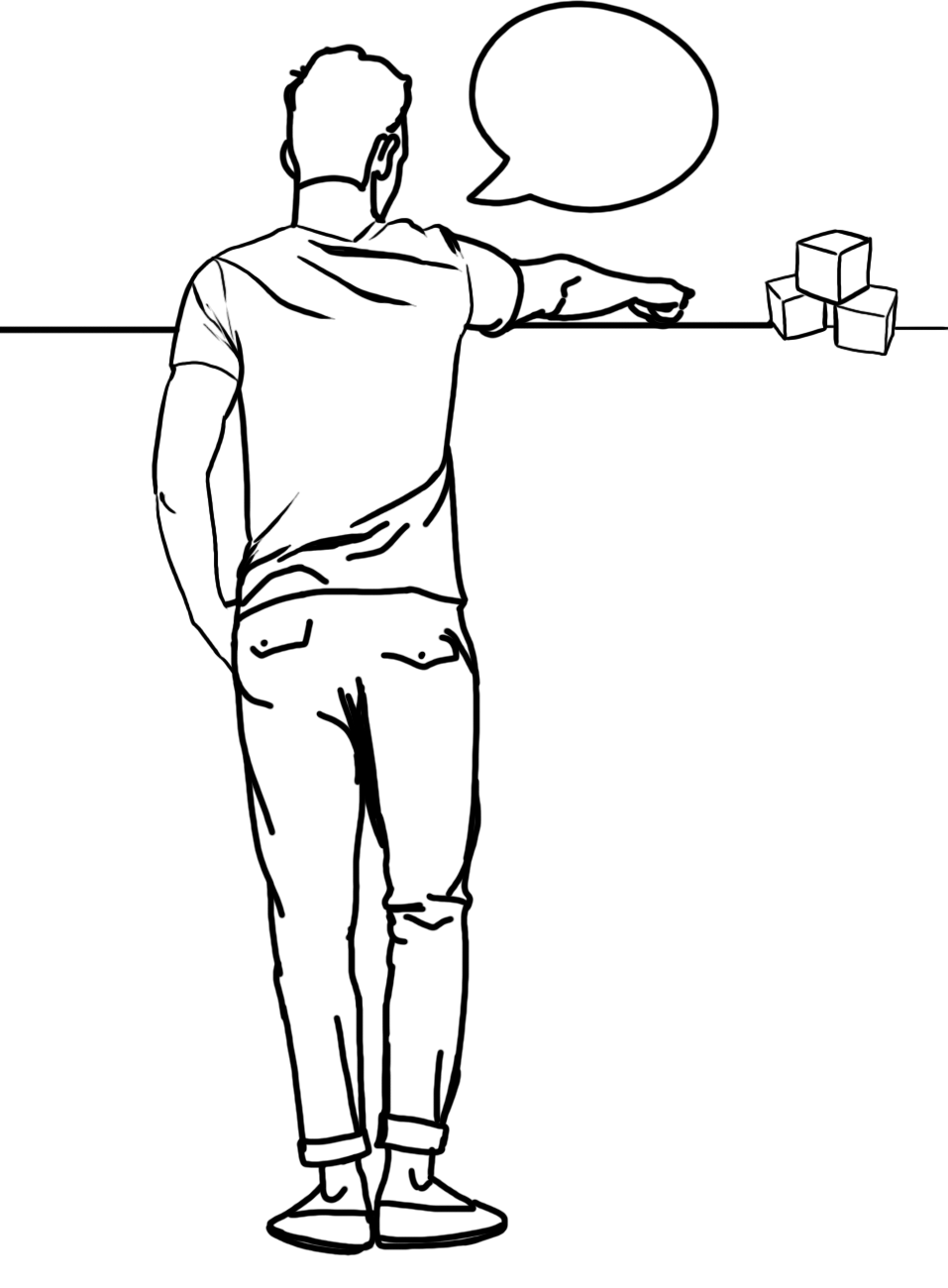 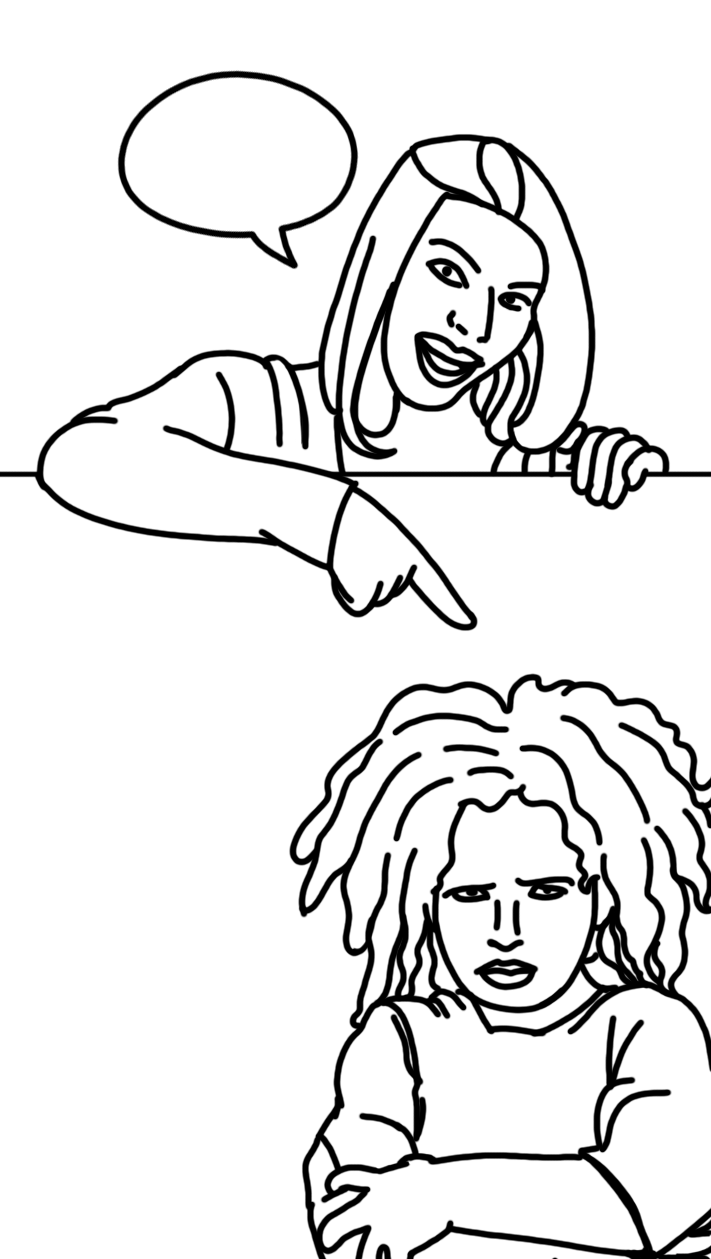 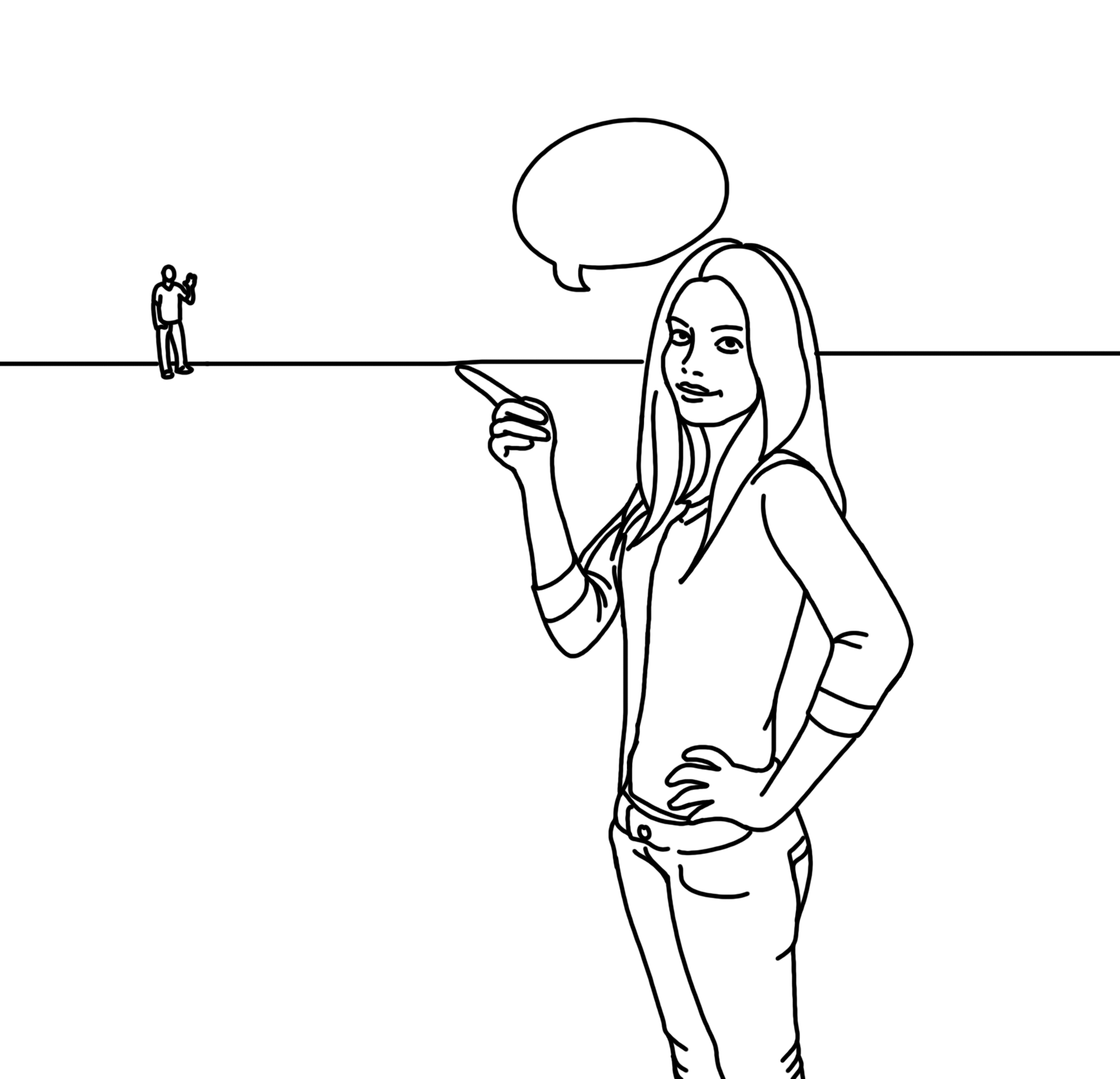 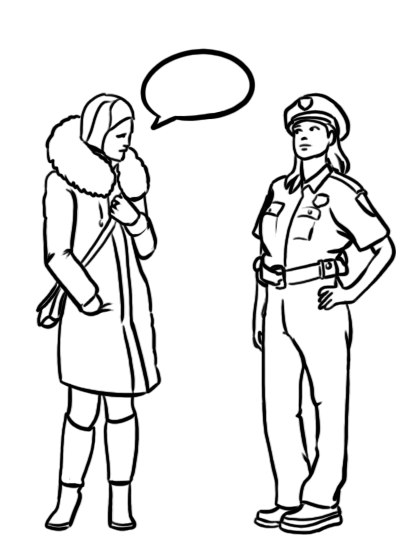 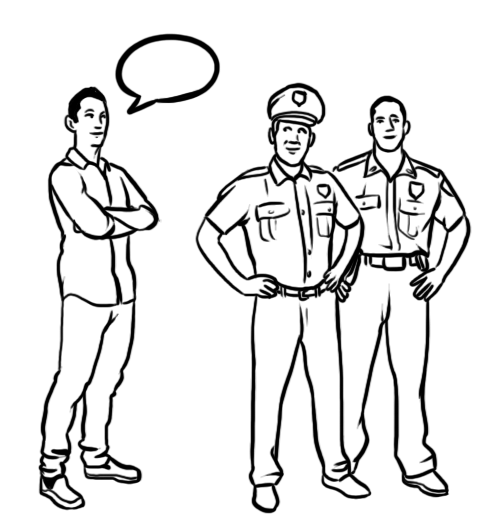 That’s it! If you’re missing some key picture for a pronoun in your language, figure out what group of people would be involved, who’s pointing at whom, and who’s saying what, and let me know in the comments. I’ll see what I can do.

Or, even better for my wallet, get your own done ($5 for a three-image set), send them to me, and I’ll post them here along with my thanks. 🙂