I keep addressing this question in various forum/comment discussions, but I should discuss it here, because it addresses a lot of issues in a lot of languages. The question is:

How do I deal with a language that uses a pictographic alphabet like Chinese? 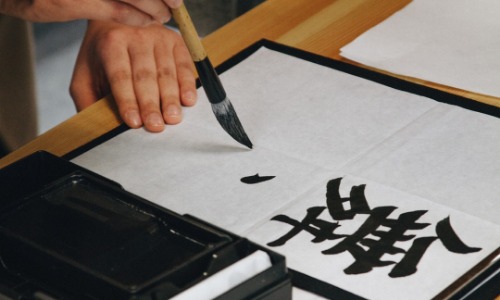 I’ve had a fascinating experience seeing how all of this works in Russian, my first really “foreign” language. The main adjustment I’ve needed to make is to be extremely careful with my card design – in Italian, I could put a picture of a dog and “il cane” on the other side without problems. In Russian, that doesn’t work; I absolutely need two cards – one with the dog picture on the front and another with the word собака on the front.

If I don’t have both cards, I can’t remember the words longer than a few weeks before I forget them again. If I did an Asian language (particularly Chinese or Kanji in Japanese), I’d probably need at least 3 cards per word (probably 4). Interestingly, this corresponds exactly to the Foreign Services Institute’s (FSI) estimates for language learning – Russian is supposed to take twice as long as French, and most Asian languages 4x as long.

For those studying other languages, Chinese has a few special difficulties:

In English:
In a stone den was a poet called Shi, who was a lion addict, and had resolved to eat ten lions.
He often went to the market to look for lions.
At ten o’clock, ten lions had just arrived at the market.
At that time, Shi had just arrived at the market. …
In Pinyin:
Shíshì shīshì Shī Shì, shì shī, shì shí shí shī.
Shì shíshí shì shì shì shī.
Shí shí, shì shí shī shì shì.
Shì shí, shì Shī Shì shì shì. …

Difficult, no?  First off, you must must must be able to distinguish the 4 tones without difficulty or else you’re screwed.  You can get away with forgetting to learn about pronunciation for Spanish or French (it will slow down your learning, but you can still do it).  This is just impossible in Chinese.
Secondly, Chinese (and other similar languages), poses some interesting challenges in terms of card design because of the homophones.  I would make (at least) the following cards for “10” (十, shí) and “stone” (石, shí):

Card 4: meaning 2 – symbol Front of Card: picture of stone Back of Card:  shí

Card 5: meaning 2 – symbol Front of Card: picture of stone Back of Card:  石

If I still couldn’t remember it (again, I suspect that Chinese might require 4 cards per word for an English speaker, given the FSI’s estimates on Chinese difficulty compared with, say, French), I might have another card or two about the symbol itself (whether the symbol is the base of other symbols or is based upon other symbols, etc. – Chinese characters have component parts, and breaking those parts down and memorizing them in Anki can be helpful).

You’ll notice that there’s no sound – meaning or sound – symbol card.  In any language, if you get a bunch of definitions for a single word, it becomes tedious to try and recite the whole list.  The word sign in English can be a noun, in which case it can refer to street sorts of signs, or signs of Aliens, or more abstractly, as in ‘signs of fatigue‘.  And then there’s to sign, which usually refers to making a signature, but could also refer to speaking in sign language in the right context.

Making one card in Anki with “sign” on the front and 5 definitions on the back is an option, but if you mark the card as wrong every time you fail to recite a list of 5 definitions every time you see it, you’re going to be seeing (and hating) that card every 4-7 days for years.  You need to design cards to make sure that you get them right most of the time.

For our sign example, make 5 cards with pictures/definitions on the front and sign on the back.   If you want to train recognizing the word sign, then you can give yourself added context:

Front of card: to sign (“He signed the bottom of the application”) Back of card: to produce a signature

Front of card: to sign (“He signed ‘Hello’ to his friend”) Back of card: to communicate in sign language

Our 6 Chinese card examples have enough redundancy to train all of the needed aspects of 10 and stone.  Each language needs its own structure to capture all of these aspects properly, while training only one of them (say the connection between 石 and stone, or 石 and the sound shí) at a time.