Note 8/23/2022: This is an older blog post containing information about using the Anki software to create flashcards for language learning.

Fluent Forever now offers a proprietary app that automates flashcard creation, letting you concentrate on your learning progress. Check out the 13 languages available in the app, and download it now to start your journey to fluency.

Back at the end of February, I posted my Japanese Radical Deck. That was meant to help Japanese students build a framework so that they could actually remember Japanese Kanji. In the comments thread, there was a fair bit of discussion as to how to modify that deck to make it work for Mandarin or Cantonese.

In the meantime, a reader, Peter Membrey, contacted us and asked if he could commission something related to Cantonese. We found someone who could modify our Japanese deck for Cantonese and Mandarin, and poof! We now have 3 new, fancy radical decks.

If you haven’t read the Japanese Radical Deck post, I’m going to quote the important parts. Make sure you read the instructions because otherwise, you’re going to be confused as to why you’re only seeing one radical instead of a bunch of them.

A brief intro to Radicals, for those who haven’t read the Logograms page

(Quoted from the Logograms page:) If you’re not familiar with the idea of radicals, here’s a quick introduction.

I see 5 letters because each of those symbols (a, p, l, and e) are chunked blocks in my mind. So I’m going to learn to do the same thing with Kanji/Hanzi characters.

If you want to learn the word ‘artist’ in Japanese, you have a 28-stroke word 芸術家 (artist) to tackle. But this beast of a word is made up of a bunch of little pieces. Take a look at the first character:
芸

From the top down, it’s 艹, combined with 二 and 厶. If I knew those 3 characters in advance, then assembling this character (which means, roughly, ‘art’) in my mind wouldn’t be that hard. It’s about as hard as learning a 3-letter word in any other language.

My main job, then, is to make sure I know all of those component characters, so I can look at something as complex as 芸術家 and see a word composed of letters, rather than 28 individual pen strokes.

All in all, there are around 200 component radicals I need to care about.

I can learn them all at once in the beginning, but it’d be more entertaining (and easier) to learn a subset of those components first (the very frequently used ones), and then start learning any new radicals I need in the context of actual words.

That’s where this deck comes in: it teaches the most frequently used radicals. This deck, ultimately, will teach you 92 of the most frequent radicals, which should cover the vast majority of radicals you need.

So, if you can really robustly connect those radicals to images, memorize exactly how to write each of them, and remember a character or two that contains them, you’ll have a mental framework that will enable you to remember all the OTHER Kanji that you may encounter.

And if that framework relies upon concrete images, rather than translations or abstract terms (for instance, connecting 攵 to a movie director’s chair, rather than a vague concept like ‘ACTION’), each component radical will ultimately become more memorable and therefore useful for our needs.

Now usually, I’d suggest that you make your own deck, and I’d tell you that it seriously didn’t take much time, it was a lot of fun, and you’d only be losing out by using my deck. But as I was making this deck for my own private use, I found that it took way more time than I was expecting because the resources at my disposal weren’t designed the way I wanted them to be.

Here’s the information I wanted to assemble:

For step 1, I wanted to break down the radicals further than Wikipedia did. Wikipedia, for instance, says that 貝 is the ‘shell’ radical. But Kanjidamage breaks that into a combination of eye (目) and animal legs (the two lines on the bottom), and I liked having those little ingredients as separate cards.

Each time I tried to make a card for one radical, I often ended up making 2–4 additional entries for each radical’s component parts.

For step 3, I wanted to find characters that used that radical that were also easy to visualize, so I could skip out on the English.

Kanjidamage was good at helping me find characters that used the radical, most of the time (there were some – like Walking Person, 彳– that took a bunch of research to figure out, since KanjiDamage and Wikipedia didn’t always agree about how they divided their radicals), but the examples on Kanjidamage weren’t specifically chosen for ease of visualization. So I had to search a fair bit for those.

All in all, it took me longer than I’d want one of my readers to spend on this work. So I thought it’d be handy to spare you all the hassle of looking things up, so you can focus on actually learning this language.

How to make this deck your own (this part is necessary)

Go to the browser by clicking ‘Browse’ on top:

Now we’ve chosen a big guy in a tie for this radical (we have a girl for the other person radical, 亻).

First off, you may want to choose different mnemonics for this. Do so. These are my mnemonics, and yours are better for you. Use Google Images Basic Mode to find your images, since then they’ll be iPhone-sized instead of Too-Damn-Big-sized.

(Side note: If a word is in Italics, it’s something that KanjiDamage came up with and not a standard reading of the word; it’s just a random mnemonic. So if you come across Kick in the nuts or George Michael’s Mustache, that’s what’s happening.)

Second, look at the example characters containing the radical, and look at the images I’m using for those characters. If you want to choose different images, do so. Your images are better than mine because they’re yours.

We have a picture of white tennis shoes for the concept of ‘white.’ That may not be the first thing that comes to your mind when you think of something white. So go back to Google images and make the images your own.

Third, in that same collection of example characters, look at where they contain the radical, and how they relate to the idea of the radical. In this case, ‘prisoner, confine – 囚’ has Person 人 inside of an enclosure 囗. A prisoner is a person inside an enclosure. Awesome. Make those connections yourself and create a visual story in your mind.

If the connections seem random or weird, then so much the better. Streetlights are made of nails and torches. Men are made of rice paddies and flexing biceps. Silver is made of gold, the sun, and a kick in the nuts.


Last, as a further impediment to you just grabbing this deck and studying it without following my instructions, I’ve gone and suspended all of the cards except for ‘mouth.’ Suspended cards are listed in yellow in the browser, have due dates in parentheses, and don’t show up as new cards until you un-suspend them.

So, every time you follow my instructions for a word and make the associations you need to make and delete the English words, then select those cards in the top part of the browser (usually 4 cards per word) and check to see that their due dates are in parentheses. You can select multiple cards by holding down shift and clicking:

Then on the top, click ‘Suspend’ and those parentheses will go away: 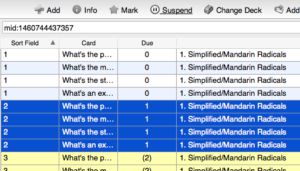 Now those cards are active, and you’ll see them whenever you study new cards.

Besides, that’s the fun work. It’s where you build your own language in your own head. All these flashcards are meant to do is reinforce that work.

Anyways, at this stage, it’s time for some download links. Enjoy, and let me know how it goes in the comments!

If you don’t know how to use Anki yet, go here first and watch the videos.


PS: If you’re just starting out with Chinese, recommend the following: Start with the pronunciation trainer. Once you’re through that, do one of these radical decks. Last, grab the model deck I’ve been using for Japanese (it works just as well for Chinese).

Get it here and read the explanation here.

The minimal pairs, spelling cards, and basic mnemonic cards are the same as my normal model deck, but I’ve added an extra type of mnemonic card that better supports mnemonics for Kanji/Hanzi characters, plus an All Purpose Japanese/Chinese card that you can use for picture words and sentences alike.

Remember that you can now download the Fluent Forever app to speed up your flashcard-aided learning in Mandarin!

Find out more about how best to review and retain vocabulary with these pro tips for learning Chinese.